3 Books@Work Books to Read and Discuss With Colleagues

At Books@Work, one of our greatest pleasures is our discovery of books and stories that inspire vibrant conversations, different perspectives and metaphors for life and work. Here are a few we and our participants have been enjoying recently. Why not try one and start a conversation yourself? 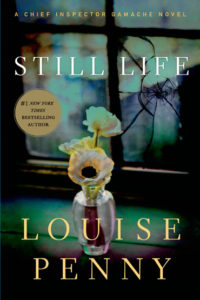 Published in 2008, Still Life was the first in what has since become an internationally best-selling mystery series. Set in rural Canada, the series stars the Chief Inspector of a Quebec police force and draws upon the contrast between small town and city life. In Still Life, Inspector Gamache is called upon to investigate what appears to be a hunting accident, but is, in fact, a murder. Read by a cross-functional group in an east coast manufacturing plant, Still Life received rave reviews – one returning participant described it as her favorite read across multiple programs. Describing their discussions of the novel, Professor Rachel Martin of Bryn Mawr College reflected that “We diagrammed the potential suspects, motives, and means on chart paper. In the process, we talked about life in the small towns near the plant where participants live, parenting and the relationships we forge across what can, on the surface, seem like barriers.”

When a pet store owner dies, the animals in the store must learn to take care of themselves. The reliable guard dog, Berkeley, takes charge, but fear among the animals and the rebellion of the monkey cause the fragile new social order to break down. Vaguely reminiscent of Orwell’s Animal Farm and Golding’s Lord of the Flies, this three-page short story packs a wallop. According to Michelle Hite, a faculty member at Spelman College who led a Books@Work discussion on “Menagerie,”  the story “provides an opportunity to examine the aftermath of abrupt and dramatic change in the lives of characters whose similarities and differences appear very human. Our discussion of the story saw participants offering ideas about qualities of effective leadership, the importance of reliable information and the role of consistent communication for the sake of a common good.” 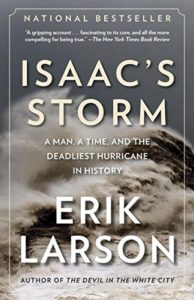 Isaac’s Storm: A Man, a Time, and the Deadliest Hurricane in History by Erik Larson

In the year 1900, a deadly hurricane hit Galveston, Texas, killing 6,000–10,000 people and shocking Isaac Cline, the local agent for the National Weather Service who had previously believed such a thing was impossible. According to Carol Wickersham, Director of Community-Based Learning at Beloit College, who led the discussion, Isaac’s Storm is “located near the turn of the [20th] century, and so much was going on in terms of people’s understanding of themselves and their relationships to nature and technology.” The book “really hit the spot in terms of its combination of history, technology and narrative,” which led to discussions “about how technology drives history and history drives technology. [. . .] Some of the older employees talked a lot about computers, and how that had shifted everything. I thought that was a really fruitful conversation in terms of thinking about the workplace, and for people to hear from each other how those shifts had changed their understanding of their work and their relationships to their colleagues.”

As always, we enjoy hearing from our readers and participants. Have you read any of these books? Do you have any books you love to talk about? Let us know what you think!