The Beauty Is in the Details: The Prismatic Effect of Literature

I recently had the opportunity to attend a lecture about Rogier van der Weyden’s breathtaking Descent from the Cross, painted c.1435 for a crossbow-men’s guild in Leuven, now Belgium.  The speaker focused much of his exploration on a beautiful detail: Mary’s porcelain hand displayed against the vibrant blue of her robes, in stark contrast to the lifeless and battered hand of her crucified son. The very human scale of the subjects reverberates in these two hands – rendering instantly accessible a moment of grief known more as a watershed religious event than a private experience of loss. 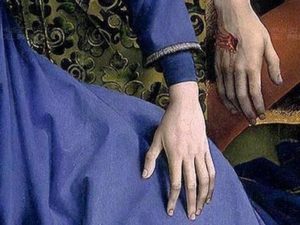 If the painting as a whole explores the universal, the detail exposes the particular, redirecting the viewer’s emotions to a more personal connection and creating an opportunity for deeper reflection on beauty, love and loss. So does the power of detail bring us each closer to an otherwise daunting piece of art.

But the visual arts have not cornered this space. Good literature also has the power to use detail to catapult us back into our own lives, to render personal even the most distant stories.

One Books@Work favorite never ceases to amaze me with its quiet ability to do just that. We have shared the power of Gabriel García Márquez’ “The Handsomest Drowned Man in the World” in the workplace, with veterans and with police officers and community members. But a deeper dive into three specific details illustrates my point. Márquez’s short story depicts a tiny waterfront village faced with the appearance of drowned man on its shores. The drowned man is a stranger, bigger and more beautiful than anyone they had ever seen before. Failing in their attempts to identify him, they begin the task of giving him a proper burial, becoming more and more attached to his memory and transforming themselves and their sense of community in the process.

As the women in the village dress and care for the dead stranger, the oldest among them gives him the name “Esteban.” Once named, Esteban shifts from being an almost magical god-like guest to a very human, deeply vulnerable man who earns their love and their tears. This plot detail deeply engages Books@Work participants, first in exploring the meaning of that particular name, but soon thereafter in exploring the power of any name to make a stranger more familiar. How much more we empathize with the plight of an individual than the struggles of a group, or feel instantly more connected to neighbors or coworkers once we learn their names.

Later in the story, as the villagers begin to imagine a community worthy of their adopted son, they see the ways in which they may plant flowers, widen their doorways or care for their homes to portray a newfound sense of pride. They “became aware for the first time of the desolation of their streets, the dryness of their courtyards, and the narrowness of their dreams.” This expansion of their dreams, a new inspiration for a broader and more inclusive aspiration, provides incredible fodder for exploration and discovery – whether as an invitation to a deeper look at the unseen details of workplace culture, or as a trigger for reframing workplace problems to expand the world of possible solutions. How often are we guilty of too narrowly construing an issue, only to limit the potential to fix it.

Finally, Márquez describes Esteban’s novelty in deeply evocative detail: “Not only was he the tallest, strongest, most virile and best-built man they had ever seen, but even though there were looking at him there was no room for him in their imagination.” In fact, the human imagination is often so deeply limited – by our upbringings, our education or our experiences – that we simply do not know what we do not know. This particular sentence has paved the way for reflective and open discussions of race and bias at work and in the community, including the dangerous ignorance of well-meaning initiatives, and ways in which history tells a single story rather than the plurality of experiences that encompass the tapestry of American society.

In short, these kinds of detail – in this story and others –  make way for the powerful conversation that Books@Work encourages by opening pathways to our personal experiences.  As one participant recently shared, “…everyone is coming from a different lens. Then when you put all those things together, you see this prism of light and experiences.” Even the smallest slivers of perspective can open the door to a whole new way of seeing the world.