Hungry for Conversation: How Literature Inspires Personal and Intellectual Discussions at Work

I recently spoke with Professor Homero Galicia about his experience leading the first bilingual Books@Work program in a Texas manufacturing plant – he and the participants read and discussed literature in both Spanish and English. Homero is a native of Texas, and did graduate work in Education Policy Analysis at Stanford University. He has taught at Stanford, the California Bay Area Community College, San Jose State University and the University of Texas-El Paso. Currently, Homero operates his own business, teaches university courses, hosts a television program and is developing two documentaries.

You’ve worked with groups to promote dialogue in a number of settings – yet you found Books@Work a unique experience because our programs include literature. Could you tell me more about how short stories promote dialogue? 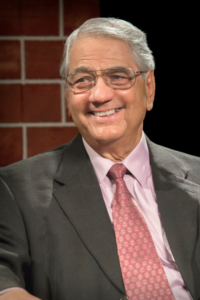 I found that people can relate to a story. They look at it objectively, but from their subjective experience. A story can reflect a reality in their lives that they can’t usually talk about. But the story gives them the freedom to talk about it. Because they can read a piece of literature and relate it to what they see – it gives them the freedom to express something that they saw and it validates their view of things.

The stories empowered the participants to articulate and show their intelligence to a group of people with whom they hadn’t been able to do that before. At work they are talking about logistics – not necessarily ideas. With literature, participants are able to show their ideas and engage with them. It’s amazing to see how people really do think. I’m talking about people who work in a factory – you could see that they knew each other from working in this huge warehouse, but they may not have interacted in a neutral environment, and the literature makes it a neutral environment.

This was our first bilingual program, and you read and discussed in English and Spanish. Can you tell me more about that unique dynamic?

All of the participants were bilingual – some were dominant in English and some in Spanish. But we all had a similar cultural experience, so we could operate in both languages. And we did. Allowing for two languages helped those that were more comfortable in Spanish to really articulate themselves. They weren’t just talking work, they were talking life and you could see people just light up.

And the material was translated in both languages; I’m not sure it would have worked as well if it hadn’t been. We read short stories, with English on one page and Spanish on the other. Some of the participants read in Spanish, some in English. Some read in both languages. And we found something interesting: there were occasions when it became clear that the English did not replicate the experience in Spanish – the language the stories were originally written in. The English translation was speaking to the English mindset. We talked about these mindsets at work, and we talked about how we could see both worlds through the stories.

What do you think these discussions did for people beyond the seminar itself?

It brought out the humanness of people who are working together, and helped them share parts of their lives they normally wouldn’t share – it gave them a context to share what their world is like, and what their lives are about. In one discussion, I asked the participants to think about the hour each day that is the most important in their lives, that defines their lives. One of the supervisors said that his life is defined by the hour after he gets off work and goes home, when he plays with his four-year-old son.

Finally, do you see Books@Work as filling a particular need or desire among the group?

The program builds collaboration because people share life experiences like these with each other, and they can relate to other people. And the group wanted more. They were hungry for these kinds of conversations, and they really did engage. There were young people and middle-aged people, and these people had serious intellects – which you might not see in a day-to-day conversation. It was amazing to see the depths [at which] they would analyze the reading. I was impressed by this. The process empowers people. It’s very subtle, but very effective.