Is Dylan Literature? Why the Question Is More Important Than the Answer

In a stunning announcement last month, the 2016 Nobel Prize for Literature was awarded to the American singer-songwriter, Bob Dylan, “for having created new poetic expressions within the great American song tradition.” Not surprisingly, those waiting for this year’s winner showed wildly diverse reactions, from delight to dismay. Some even saw the Prize as proof that the book is dead, or that the business of selling books is even further doomed.

The most interesting question to me, however, is not whether Dylan’s work deserved a Nobel Prize (and certainly not whether the Prize indicates some downfall of reading as we know it). Quite the opposite, I’m intrigued by the implicit expansion of the idea of literature, and correspondingly, an exploration of its readers. 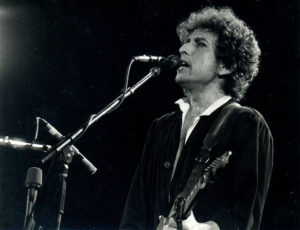 In fact, many of the people who enjoy Bob Dylan may not be self-styled literature enthusiasts. But Dylan’s Nobel Prize makes one thing clear: precisely because they read and consume his music, Dylan fans are already literature readers. And while some may be found in the hallowed halls of academia, others are living very different lives – as school teachers, machinists, food service workers, gas station attendants. And if they are consuming Dylan, what else might they be consuming that might challenge the boundaries of (capital L) Literature, the boundaries the 2016 Prize’s naysayers seek to protect?

People read and derive serious and genuine meaning from many creative outlets – the spoken word, the written word, the melodic word. Through literature, we explore the human condition in ways that permit us to explore our own stories, to share our points of view. The Dylan Prize controversy encourages us to acknowledge that the traditional literary canon is construed too narrowly – that enjoying literature means reading Proust, but might it also mean a teenager learning to play a Beatles song or a commuter absorbed by Dan Brown? Where is the line between Art Spiegelman’s Maus and the most recent Marvel comic books? They may not all be Literature, but the inquiry is important: when a story – told, read or sung – inspires and moves us, creates reflection and a deep sense of personal connection, haven’t we fulfilled literature’s primary mission?

This sense of connection highlights the powerful tie between literature and music; both engage us emotionally and open us up to hear, receive and reflect upon new stories. In a Books@Work program last spring, a diverse group of individuals gathered to meet Mona Golabek, author of The Children of Willesden Lane, and performer of The Pianist of Willesden Lane, each moving stories of her mother Lisa’s experience in one of the early Viennese Kindertransports during World War II. A thoughtful young woman explained to Mona that she had been skeptical of the story, concerned that she might not be able to relate to its contents:

“I would never go to a concert to hear a pianist. That wouldn’t just be my thing. I didn’t know much about the Holocaust. I knew it had happened. I knew it was horrible. The Holocaust reminded me of slavery and I didn’t want to read about it because it’s so depressing. [But] the Holocaust was a big balloon and her music was the heart of the story. When all else fails, I still have music, I don’t have my family but I got the music. Each hurdle she got over, she still had the music so her life got better… I was shocked by how much I enjoyed it.”

It was the music that drew her in, but the story that captured her.

Whether or not the Nobel Committee intended to expressly rebuke the constraints on the definition of literature, this provocative choice has opened the floodgates and invited questions and debate about Dylan’s work, the Prize and the very nature of literature. When was the last time the Wall Street Journal ran three full pages on the topic of literature? This line of questioning is heartening, as it helps us rethink the role of the written word and of literature in our lives – every single one of us. The questions are healthy and they may not hold clear answers. We may not agree on what to do with Bob Dylan and the Nobel Prize, but it does us good to be – well – “tangled up in blue.”

A variation of this post first appeared in ReadThink, a HubSpot publication.

Learn More About Our Programs or Read More on The Notebook:

The Nobel Prize’s Power to Lift Authors From (Relative) Obscurity
On War, Dancing, and Light: Why Metaphors Matter
The Power of Experience