The Best Books and Short Stories to Spur Conversation in 2018

The end of 2018 brings with it a wave of “Best Books” round-ups – and we at Books@Work are no exception. But instead of naming new favorites in 2018, we want to share the books and short stories that spurred the most profound, perplexing and thought-provoking discussions for Books@Work participants this year.

We believe that meaningful conversation kindles social connection in the workplace and beyond. These ten diverse narratives represent the essential “ingredients” for good conversation, from dynamic characters and ethical dilemmas to energetic plots and unfamiliar worlds.

James McBride, The Color of Water

The only memoir on the list, The Color of Water narrates the parallel lives of author James McBride and his mother. Fleeing a stifling religious background and raising twelve biracial children, McBride’s mother overcomes adversity to pursue her own education later in life. In discussion, participants have explored issues of identity, race, parenting, family and more. 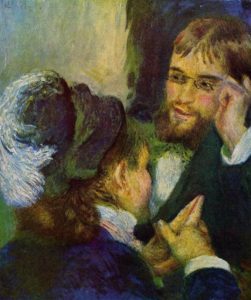 Ruth Ozeki, A Tale for the Time Being

Ozeki’s novel tells the story of Nao, a teenager whose family moves back to Japan after her father loses his job; and Ruth, who discovers Nao’s diary washed ashore on an island near Vancouver. Books@Work groups focused on the novel’s portrayal of bullying, cultural difference and unemployment – and shared their personal stories, too.

Amor Towles, A Gentleman in Moscow

In Moscow, Count Alexander Rostov is sentenced to house arrest in a luxury hotel by a Bolshevik tribunal. There, he is forced to live with his thoughts and emotions while history unfolds outside the hotel walls. Participants veered into passionate debates about the count and discussions about how exactly we characterize “the outside world.”

Cameroonian immigrant Jende Jonga finds a job as a chauffeur for Clark, a senior executive at Lehman Brothers, determined to make a better life for his wife, Noni, and their son. But Jende and Noni find that Clark’s life and family are far from perfect. The novel’s vibrant characters opened up discussions about immigration, the pull of home and ethical conflicts in the workplace.

Denise Kiernan’s nonfiction book The Girls of Atomic City launched conversations about gender roles, government secrecy and scientific advancement through the lens of WWI. The book tells the extraordinary true story of the young women who were brought to the top-secret town of Oak Ridge, Tennessee to help build the atomic bomb.

When does ambition become toxic? Participants explored the complicated ethics of doing business in discussions about “The Hardware Man.” O’Hara’s story centers on a young man who takes ownership of a hardware store, driving his competitor out of business. Professor Clare Morgan shared details from her own Books@Work group’s discussion of the story.

A perfect vehicle to tackle the societal impact of technology in 2018, “Good Hunting” has launched profound conversations about change, adaptation and survival in Books@Work programs. As westerners modernize society in China, the old magic disappears. When a “hulijang” – half-woman, half-fox – loses her ability to transform, a young Chinese man must help her preserve her magic and adapt to the new world.

Raised by werewolf parents, a group of human girls is brought to a special home run by nuns to be educated and civilized. Funny and poignant, Karen Russell’s short story raises questions about mentoring, acceptance and what we lose when we assimilate into a new culture – themes that Books@Work participants have found particularly powerful.

Short story master George Saunders’ story “Puppy” challenges participants to re-evaluate the deep-seated reasons we judge others. Two mothers from very different backgrounds encounter each other when one buys a puppy from the other – and we see the hilarious and heartbreaking plot unfold from both mothers’ perspectives.

The most popular members of an all-black girl scout troop convince their fellow Brownies to confront an all-white troop for using a racial slur. But the confrontation falters when the troop realizes they may have misjudged the situation. Books@Work participants have explored a number of profound questions around ZZ Packer’s brilliant short story, namely: How can our sense of the world cloud our vision?