Books at Work: Clémentine in the Kitchen

Many of our seminars bring literature to work spaces – John Cheever’s short stories to Fairbanks-Morse, for instance – sparking compelling discussions of workplace problems and personal ethics. But books don’t only bring added value to these spaces. Books are also critical means through which people explore the work and work spaces which are, after all, essential parts of their lives. In this continuing series, we make note of books that explore these issues.

Samuel Chamberlain’s Clémentine in the Kitchen is a classic food memoir, an early version of Peter Mayle’s A Year in Provence or even, more closely, Julia Child’s My Life in France. Chamberlain lovingly chronicles his idyllic family life in a small town outside of Paris just before World War II.

This life is upset, however, when Chamberlain’s American firm withdraws from Europe in 1939, bringing its associates and their families home with them. The Chamberlains, at first devastated, are comforted when they realize that their French cook, Clémentine, fully intends to return with them.

Clémentine in the Kitchen is full of French recipes and charming illustrations. But it is as much about the pleasure of doing good work, despite setbacks, as it is about food. Life in America isn’t exactly easy for Clémentine, who struggles with the English language and who only manages to answer the phone in “her own individual French way. On a piece of cardboard by the telephone she inscribed one phonetic message for use in all emergencies: ‘Madame Beck is aoutt. Shi weill retournne att sevenne au’cloque.'” At the grocery store, she is stymied by the owner’s initial response to her list. “What was Kirsch? Why Greek Olives? Wouldn’t onion do as well as shallots?” 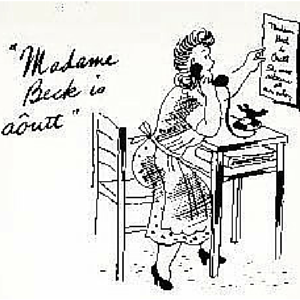 The family is amused when Clémentine experiences her first hot dog, first American packaged cakes and first boiled peas and carrots. But Clémentine, for whom cooking is an art, is ultimately unshakeable. Her commitment to cuisine is tested throughout the period Chamberlain describes, but her perseverance rewards us all, as it leads her to adapt classic, French recipes for American kitchens. As Chamberlain writes:

“Perhaps New England would turn out to be barren soil for Clémentine’s cuisine française, after all. But again we should have known better. Clémentine returned to her sunny kitchen full of confidence, eager to get her hands back in the mixing bowl.”

Clémentine is demanding in her professionalism–she insists upon cooking good French cuisine with fresh ingredients. At the same time, her work ethic is dynamic and flexible. She transforms challenges into opportunities and overcomes the limitations set by American food practices in the 1940s.

It’s not all fun and escargots, however. The shadow of war looms as the family and Clémentine worry over loved ones left behind in France. But the artistry that typically goes into Clémentine’s cooking helps here, as well. Cooking and eating Clémentine’s recipes fondly recall the “Becks” (the Chamberlains’ pseudonym) to their French allies – and, as Chamberlain hopes, might well create profitable associations between the United States and France.

Like many works of literature Clémentine in the Kitchen focuses on a specific subject, a specific period in time, but its message carries more broadly: sharing in cultural objects, be they food or books, brings people together. Cuisine, Chamberlain argues, builds bonds between people, helping them know and appreciate one another more fully. That is good work, indeed.