Crafting the Common Language: Belonging and Inclusion in Workplace Culture

When I joined McKinsey & Company some time ago, my first day coincided with an office conference on innovation and business in the new economy, the very area in which I was hired to contribute. How fortuitous! But to say that I understood about half of what people were saying is ambitious. Truthfully, despite my years as a corporate lawyer and deep exposure to business and innovation, McKinsey spoke a language I had simply never heard.

I am a pretty quick study, and over the years I became fluent in that language. And long after leaving the firm, I confess to still using certain expressions that just work. But more important than the words themselves, I learned two things. First, this common language was a phenomenal unifier – part of a shared culture that bound thousands of professionals who rarely spent time in the office and whose work took them to all corners of the globe. Second, they had invented it themselves. But their sense of belonging – and eventually mine too – to this unique-speaking organization was undeniable. 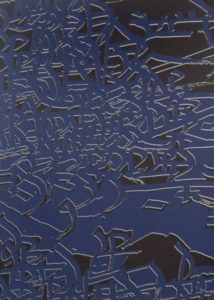 Ulfert Wilke, Without Words VIII, 1977, [Fair Use] via WikiArt.org

Perhaps I recognized the power of this shared vocabulary because it was new. I had grown up in law firms, where the common language is largely technical (try chatting at the coffee machine with a tax lawyer) and the interest in creating a culture of belonging was, well, non-existent. After all, doesn’t talk take away from work?

But our ability to communicate – to share a language – is a hallmark of collective human strength recognized since biblical times. When God looked to mete out the harshest punishment possible for a people united to try to destroy him, he created the Tower of Babel where no one could speak the same language!

Although a common language alone will not assure a healthy culture, science and best practice demonstrate that a positive shared jargon contributes powerfully to effective teams, innovation, creativity and workplace trust. But the reverse is also true, as the effect can also be negative if the words are divisive or overly aggressive. But in so many examples, the language comes from the top or from the outside, from a specific management desire to elicit certain desired outcomes.

At Books@Work, we heartily embrace the common language as a critical contributor to effective interpersonal communications. But we believe that participants need to find the phrases and themes that resonate with them.  One group read Herman Melville’s “Bartleby the Scrivener” and retained his famous “I prefer not to” as a unifying phrase. Another read Chinua Achebe’s “Dead Man’s Path” and continuously returned to the path as a metaphor for tradition. And a third found that “sitting in the window seat” when they travel, an idea inspired by Helen McDonald’s H is for Hawk, became their team’s metaphor for self-reflection and renewal.  Through these stories, our groups find the words that speak to them at that time and in that place.

After reading Heinrich Böll’s “Action Must Be Taken,” a fast-paced satire of American business, one team leader remarked, “You know how sometimes when you have a shared experience. . . [you] have a little bit of a different language. [W]hen we say something like ‘action will be taken,’ everybody laughs. Everybody gets the joke.” It’s the private joke, knowing phrase or shared experience that participants create together – a common language in their company’s own dialect – that sets Books@Work apart.