Academic work in the humanities and social sciences often gets a bad rap: people just don’t always understand the point of it, or they associate it with high school and undergraduate essays. And then, there are also logistical issues: academic books are expensive and often unavailable at community libraries; written for specialized audiences, they can also be dense and difficult to read. But for every person out there wondering why the world needs another essay on Shakespeare, there are a dozen academic ideas that shed light on our histories and cultures – that help us understand our world. In this series we make snippets of those ideas, old and new alike, more available.

Dispatches from Dystopia: Histories of Places Not Yet Forgotten was a bit of a departure for me. Virtually all my academic reading for the past few years has been confined to the culture, literature and history of eighteenth- and nineteenth-century Britain, but one of the pleasures of my new position is the inherent invitation to read more about reading itself.

It doesn’t exactly take astute cultural analysis to say that we live in an age increasingly interested in, one might even say spellbound by, the concept of dystopia. Over the past five or so years, bestseller after bestseller has engaged with this genre. I myself read widely in it, moving between The Hunger Games, and The Age of Miracles, and The Handmaid’s Tale.

But these aren’t quite the dystopias about which University of Maryland professor Kate Brown is writing. Dispatches from Dystopia isn’t so much interested in the myriad depressing and oppressive possible futures we might encounter as it is in the past. For Brown, a dystopia is simply defined as “communities and territories that have been silenced, broken, or contaminated.” The book isn’t about literature, but it is about reading – about reading landscapes, reading pasts, reading lives and people’s faces. It doesn’t advance one single argument so much as it advances the idea that places are readable, though reading them may be more difficult than reading prose and paintings. The dystopias Brown encounters are places with dystopic pasts: a basement in Seattle; the Chernobyl zone; Uman; Kazakjstan; Billings, Montana; Elgin, Illinois.  Brown’s goal is to tell their stories, which she does over the course of seven chapters. 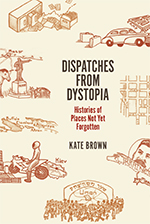 Image via University of Chicago Press

There are many, many beautiful ideas in this book, which is jam-packed with images, interviews and analysis of details as minor as the contents of a trunk. Brown seeks out the liminal spaces of our world; she dives headfirst into places you and I will probably never see. And her discussion of these spaces, the people who live in them and their history is all the more interesting for it. The chapter I found most fascinating, however, was that on “Gridded Lives: Why Kazakhstan and Montana Are Nearly the Same Place.” The chapter begins with a simple problem: Karaganda, Kazakhastan and Billings, Montana look an awful lot alike, especially on a map. How is that possible, Brown asks, given the massive and obvious differences between these two places?  Built in the 1930s, Karaganda, she observes, “was [Soviet] a prison city in that it was built largely by convicts and fed on crops grown in the labor camp’s farms, while prisoners and deportees worked in the mines and factories of its blossoming industries” (97). On the other hand, Billings was a railroad town established in 1881. The memory of the former is often hidden or unmentioned, while the memory of the latter is a celebrated part of American national history.

But Karaganda and Billings do have similarities, and Brown explains them by reading for construction patterns, personal histories and lost opportunity – among other tools too many to itemize here. To begin, both were built quickly, on a grid and from scratch. They are new communities, without the meandering roads and long-reaching histories of older cities. As Brown writes, at one point:

“Although Soviet and American planners could imagine these insta-cities, they could not orchestrate enough bricks, laborers and lumber to build them. In this sense, the American booster press and Soviet propaganda read like science fiction. The words describe a possible, even plausible, future, but one that did not yet exist.”

The United States and Soviet Russia presented themselves to their citizens and to each other as polar opposites. Despite this, they ran up against the same walls as they attempted to expand and make life better for their citizens – often with similar consequences. Both Billings and Karaganda were hard places to live for those who moved there first: in each case, early settlers came expecting an establishment only to have to build the city themselves. And, most surprising of all, both were considered places for opportunity. We expect as much of Billings – not so much of the Soviet prison city. Brown learns, however, that at least some deportees went willingly while others signed up to be deported, thinking they were going to a place of greater stability: more jobs, more food. This analysis, deployed over 40 pages, is above all else thought provoking. In it, Brown asks us to consider the rhetorics of improvement, freedom, labor and expansion, and she uncovers the similar problems and processes that led to these similar spaces.

If Brown has a singular investment in this book, it is that of  bridging the gaps between cultures by reading for similarities in hidden-away places. How are people like one another? How are seemingly insurmountable differences expressed? And what should we make of it when we find that those differences are expressed similarly, whether in literature, in art or in streets and buildings? She knows how to read landscapes and people for evidence of a lost past, and her book is a testimony to the value of that capability – and one might think of it also as a guide to how to read what might seem unreadable.