The Elephant in the Room: Healthy Companies Address Workplace Problems

Recently, I had the pleasure of giving a presentation on the importance of social interactions in the workplace at the International Conference & Exposition of the Association of Training and Development in Atlanta. Over four days, 10,000 attendees chose from 400 presentations on a broad array of topics.

Honored to speak, I was also excited to hear the thoughts and insights of others at sessions ranging from effective storytelling to the neuroscience behind successful teams (hint: we are biologically wired to prefer face-to-face meetings). One idea in particular, however, resonated so deeply that I’ve thought about it many times since the conference ended.

In a session on culture, Joseph Grenny, author and co-founder of the social science research firm VitalSmarts, asserted simply: “The health of a relationship, team or organization is a function of the average time lag between identifying and discussing problems.”

We’ve all worked with someone who excels at finding all the things an organization does wrong. Maybe we’ve even found ourselves doing it too. Identifying problems is easy. Talking about them? Not so much.

In fact, Grenny’s research is sobering: In a study of over 1000 people, 72% failed to speak up when a peer did not pull his/her weight; 68% failed to speak up in the face of instances of disrespect; and 57% failed to call peers on violated workplace processes. Each failed conversation was costly as well, accounting for thousands of dollars in lost productivity. 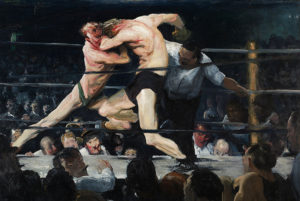 This ability or willingness to speak up – to initiate and sustain difficult conversations – doesn’t just happen. Just as a muscle requires development and regular conditioning for optimum performance, conducting challenging conversations and respectful disagreements takes practice.

Books@Work provides this very practice. Literature provides a safe context outside of work for colleagues to explore different viewpoints and perspectives and to practice challenging each other’s ideas with respect. The impact of this practice, one senior leader explained, is “focus and speed of execution. A lot of the questioning that we would do before was not exactly critical. . . or deep inquiry. It was really questioning to try to understand someone’s mental model or trying to understand if they had an agenda.” As a team that begins its regular meetings for the last several years discussing a short story with a professor, “we’ve used the platform to make mental models more explicit. We can get right at an issue that may be sensitive, that may be the elephant in the room, that might be undiscussable.”

Another senior leader explained quite explicitly, “It’s not the book, it’s the discussion about the book.” The book creates the safe space for an unprecedented form of personal discussion – of higher quality than previous interactions – that gives his team members the sense of psychological safety they need to openly confront the issues that bother them. “We needed to build trust,” he concluded. The narrative-based conversation “greases the skids, or accelerates, which makes everything a little bit faster.”

Continuing, he reflected: “Books@Work lets us come out of our shells, it shakes up the environment so that we can talk about things.” He recounted a talent review that lasted three times longer than prior personnel discussions. Following a spirited debate grounded in a particularly provocative story (Charles Johnson’s “Menagerie”), “the team spoke of their own teams with respect and dignity, truly delving into each person’s behaviors while questioning their own roles as leaders.” The team members had been previously very uncomfortable discussing the performance of their direct reports, reluctant to share what may or may not be going well, and fearful that any unfilled roles might be permanently closed. As a result, many had quietly struggled with low-performing teams. After Books@Work, “one of my guys asked [the group] for advice. He wouldn’t have done that before.”

Addressing problems is never easy. For colleagues in organizations that pride themselves on collegiality and compliance, it’s nearly impossible because collegiality often hinders candor. But with the right opportunities to practice – to build the muscles of respectful challenge and disagreement – reducing that lag time between seeing and addressing problems is more than possible. It’s enjoyable too.