That Can Be Me: How a Genuine Literature Discussion Can Lead to Self-Discovery

In a recent post, I explored the subject of listening as understanding, and ever since I have had a heightened awareness of talking and listening in the public space – and, more importantly, in my own social interactions. The current public discourse displays a flood of talking and a drought of listening, but I have been surprised at how much private discourse (including my own) suffers from the same conversational excesses. We seem to listen so poorly, in fact, that we no longer notice how little genuine dialogue is happening. If listening does lead to the “miracle of understanding” described in my earlier post, it has become increasingly clear to me that something about Books@Work discussions makes that miracle happen.

One obvious reason for this is that a skilled college professor facilitates the tone and norms of these discussions. And unlike many workplace interactions, these conversations are not competitions that are seeking one right solution. Rather, they provide the opportunity for colleagues to come together to explore differences, challenge biases and uncover varied interpretations. Too many of the conversations I’ve witnessed in the past months, whether in the workplace, on TV or around the family table, are more about stating and defending a particular point-of-view rather than considering other viewpoints with an open, patient mind and a tempered voice. 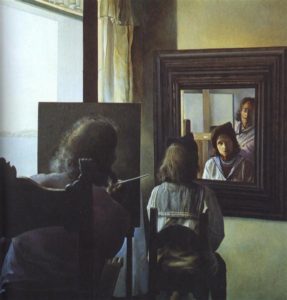 Salvador Dali, Dali From The Back Painting Gala From The Back Eternalized By Six Virtual Corneas Provisionally Reflected In Six Real Mirrors, 1972-1973, [Fair Use] via WikiArt.org

Another explanation for the success of Books@Work groups lies in the very nature of literature as a catalyst for thinking and sharing ideas. Kenneth Burke, an influential literary theorist of the 20th century, called literature “equipment for living,” because it has the power to illuminate things that matter in everyday life. Like Burke, Books@Work participants discover important connections to their own lives in the narratives they share. A few examples:

Literature does not provide specific prescriptions for how to live – it creates a reason to listen well to others’ interpretations as a way of understanding shared and divergent points-of-view. Literature impels us to slow down, pay attention and make sense of our experience. It’s when we slow down that true, honest dialogue happens.

The sense of discovery that comes from genuine dialogue is clear in a quote attributed to many authors from André Gide to E.M. Forster to the social scientist Karl Weick: How do I know what I think until I hear what I say? Each of these authors stressed how important it is to listen to yourself in order to understand your thinking process. In recent conversations I’ve observed, I see that too often we are planning our next retort instead of seeking understanding as we listen to ourselves and to each other. How different it is when we actually listen with an open mind, seek the value of different points-of-view, and even modify our own thinking as our conversations unfold. Weick suggested that meaningful connections arise most often from surprising insights – the a-ha moments – that defy preconceived notions and challenge our expectations.

These experiences encourage individuals to reshape the way they see themselves and promote adaptation and innovation within a group. In the first pilot sessions for Books@Work, a cook in a college cafeteria who had read Emile Zola’s Germinal spoke to a group of foundation funders and said, “I have put three children through college, but I never thought that I was capable of doing college work. Now I know I can.” She helped inspire the foundational impetus for Books@Work – “that can be me”.