The Noise of Contemplation: Embracing Silence in the Workplace

In the recent March for Our Lives rally in Washington D.C., organized by survivors of the Marjory Stoneman Douglas High School shooting, student leader Emma González took to the stage to deliver a speech. After a short opening statement, she stopped speaking altogether and gazed ahead into an eager crowd of thousands. She spent the next six minutes in complete silence as the disoriented crowd cheered and clapped to fill the void. Despite where you fall on the political spectrum, González’s speech (or lack thereof) embodied a powerful truth: uncomfortable silence is an incubator for introspection – whether we like it or not.

Words and gestures and body language mean different things to different cultures – as does silence. “Anglophones tend to be most uncomfortable with long gaps in a discussion,” writes Lennox Morrison in a fascinating piece for BBC. “Even among sign language speakers, studies show that typically we leave just a fraction of a second between taking turns to talk.” A 2015 study of Japanese communication found that Japanese people in business meetings “were happy with silences of 8.2 seconds – nearly twice as long as in Americans’ meetings.” Another study comparing silence in Japanese and Finnish culture found that in Finland, “silence is tolerated and in certain social scenes it is preferred to idle or small talk.” 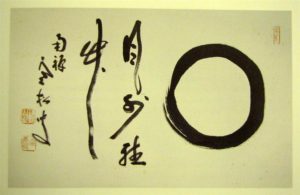 Zenkei Shibayama, Beyond the Wind, Listen to the Bamboo, [Fair Use] via WikiArt.org

In Books@Work discussions, professors often identify with the Japanese and Finnish view of silence, using it as a powerful learning tool. In March, we interviewed Spelman College professor Michelle Hite about her experience facilitating literature discussions with colleagues in various workplaces. “You get a feel for the room, the questions, how people are engaging,” Michelle said. “What you have to do is realize, okay, how much silence do you let go? The experienced facilitator is comfortable with the silence. I call it the noise of contemplation.”

Michelle’s brilliant articulation reveals why González’s silent protest was so effective – it forced the crowd to consider and absorb her message, no matter how uncomfortable. Michelle’s take also suggests that the English speaker’s tendency to fill the silence stifles creativity and contemplation. Silence forces us to develop what brews beneath the surface in a conversation: a nascent idea, a productive comment or a revelatory breakthrough. Silence is not an empty void to be filled, but an opportunity for reflection and wisdom. There’s a reason the Japanese have an old proverb that “a silent man is the best one to listen to.”

Silence also offers a chance to collect ourselves. Consider a business meeting in which a superior puts you on the spot with a tough question. Is it better to speak right away – or to take a moment to shed any anxiety and put your thoughts in order? The same goes for a tense meeting during which you disagree with a colleague. How often have you said things you don’t mean in the heat of the moment? We need to “give people a moment of silence to get beyond the emotional response,” says Matthew MacLachlan of a U.K-based language and soft skills training provider. It’s exactly why we discourage a “quick tongue” and encourage children to think before they speak.

Most importantly, silence is key to a collaborative environment in which colleagues listen to and appreciate each other’s contributions. It’s for this reason that Finnish people associate silence with the art of listening and fall so comfortably into quietude. “No one is saying anything but everybody’s thinking. They are engaged,” says Donal Carbaugh, a professor of communication at the University of Massachusetts-Amherst. Books@Work board member Karen Nestor has examined this idea of listening without interrupting, writing, “When we listen for understanding, we make ourselves vulnerable to examining our own ideas in new ways that open us up to change.”

When it comes to listening, silence is crucial. What better way to expand our horizons in the workplace than to shed the taboo, embrace our discomfort and listen carefully to the “noise of contemplation”?