In a post-program interview, a participant in a distribution center observed that Books@Work professors “read in between the lines.” Although he entered the conversation with a particular perspective based on his own reading, the professors challenged him to read more deeply, to find something he didn’t initially see. As the program progressed, instead of “just reading or retaining information,” the participant began to read for what he called “clues” in the story, “little clues that aren’t actually in quotations or blatantly out there.”

Another participant, reading Hemingway’s Nick Adams stories with her colleagues, recently told their professor that she was excited to explore “beneath the surface” of his words. Together, they had discussed Hemingway’s iceberg theory, in which he intentionally tells a simple story, leaving the reader to discover and expose the underlying themes.

In the English classroom, a professor would call this deeper engagement with a text “critical analysis.” It’s the ability to see beneath the surface, to reason through the meaning of details, and to situate the object of analysis within a larger context–it enables vital, careful thinking about texts, yes, but also about people, organizations, experiences. “Critical” in this context means crucial, of central importance and critical analysis is a close cousin to the elusive “critical thinking” so many organizations seek to foster in their workforce. We all become better employees and co-workers, friends and citizens, mothers and fathers, when we improve and refine our ability to understand what’s around us through observation and thoughtful analysis.

Although scholars may disagree about its precise definition, they uniformly acknowledge that critical analysis (sometimes called textual analysis or close reading) is the beating heart of literary study. They also agree that its value extends far beyond the walls of the university. The professors who sign on to teach with Books@Work do so because they believe this, and they want to explore critical analysis with people who have left the post-secondary educational system or who have not had access to its riches. Time and time again in our exit interviews, participants report that critical analysis, what they instead call “reading between the lines” or “going beyond the story,” is a central element of their Books@Work experience. 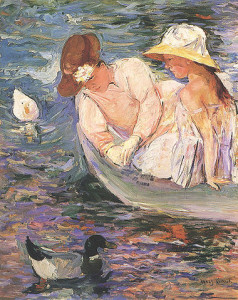 Texts of all kinds invite interpretation – they rarely communicate a single idea, and they are built on layers of meaning rather than a static set of messages. This ability to see subtext, to see implied meaning rather than just surface meaning, has direct application well beyond the literature seminar. One Books@Work participant, a risk management associate, explained this idea most powerfully in describing her new approach to reading legal documents as reading stories with different “pieces and themes”: “what do they mean by that paragraph?” she asked herself, “If I don’t take it at face value, what implications could that have in the grander scheme of things? It caused me to take a step back and look at it from more of a big picture, rather than just the literal, ‘I’m reading contracts now’.”

Learning to do critical analysis, to read closely and “between the lines” causes participants to read not just texts but everything around them, differently. Marvin Riley, the President of Fairbanks Morse Engine, has implemented Books@Work seminars throughout his company – from his executive team to his production floor. In a presentation this summer at Chautauqua Institution, Marvin shared the power of critical analysis for his team, and for himself:

Narratives, in their endless complexity, serve as a powerful proxy for the complexity of people and experience that we all contend with every day. Learning to analyze them critically empowers participants to make “so much more” out of all that they encounter.

And who couldn’t benefit from seeing just a little more?