Each month, we pause for a moment to read mindfully, using literature as a springboard to think about, and to practice, compassion, empathy and awareness – of ourselves and of the world we live in.

Most of us know F. Scott Fitzgerald as the author of The Great Gatsby – that canonical text, ubiquitous in high school English classes and revisited in a recent film version. But the American author wrote a number of other works – haunting, evocative novels like Tender is the Night, as well as a few collections of short stories.

First published in 1931 in The Saturday Evening Post, “Babylon Revisited” follows the main character, Charlie, as he tries to regain custody of his daughter. In Paris, Charlie is forced to come to terms with the consequences of his past actions – as well as confront a series of acquaintances from his life before the Wall Street Crash of 1929.

As you read, consider these questions: 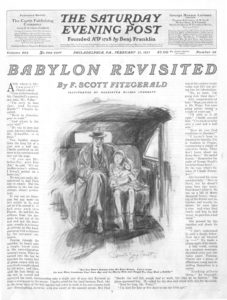 “I’m sorry to hear that. And George Hardt?” Charlie inquired.

“Back in America, gone to work.”

“And where is the Snow Bird?”

“He was in here last week. Anyway, his friend, Mr. Schaeffer, is in Paris.”

Two familiar names from the long list of a year and a half ago. Charlie scribbled an address in his notebook and tore out the page.

“If you see Mr. Schaeffer, give him this,” he said. “It’s my brother-in-law’s address. I haven’t settled on a hotel yet.”

He was not really disappointed to find Paris was so empty. But the stillness in the Ritz bar was strange and portentous. It was not an American bar anymore – he felt polite in it, and not as if he owned it. It had gone back into France. He felt the stillness from the moment he got out of the taxi and saw the doorman, usually in a frenzy of activity at this hour, gossiping with a chasseur by the servants’ entrance. Keep Reading

Why We Are Still Reading Mindfully