Each month, we pause for a moment to read mindfully, using literature to think about our perceptions and reactions to the world in which we live and work. Through these short texts and accompanying questions, we hope to give you a small taste of Books@Work. We hope you might share and discuss them with others – or send us your thoughts.

Although Katherine Mansfield spent most of her adult life living in London and traveling continental Europe, many of her short stories evoke the New Zealand of her childhood. A modernist writer, Mansfield was a friend of D.H. Lawrence and Virginia Woolf. Her short story, “The Garden Party,” influenced Woolf’s masterpiece, Mrs. Dalloway. 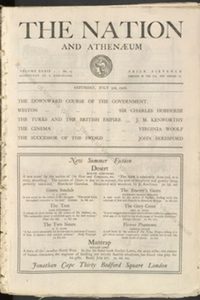 The Nation and Athenaeum, July 3, 1926 [Public Domain] via the British Library

“The Doll’s House” (1922) was first published in The Nation and Athenaeum. In the story, Mansfield turns her attention to the Burnell family – characters who appear in a number of her other works – and their response to a generous gift.

As you read “The Doll’s House,” consider these questions:

The Doll’s House
By Katherine Mansfield

When dear old Mrs. Hay went back to town after staying with the Burnells she sent the children a doll’s house. It was so big that the carter and Pat carried it into the courtyard, and there it stayed, propped up on two wooden boxes beside the feed-room door. No harm could come to it; it was summer. And perhaps the smell of paint would have gone off by the time it had to be taken in. For, really, the smell of paint coming from that doll’s house (‘Sweet of old Mrs. Hay, of course; most sweet and generous!’) – but the smell of paint was quite enough to make anyone seriously ill, in Aunt Beryl’s opinion. Even before the sacking was taken off. And when it was…

Stepping Into Others’ Shoes: Literature and Workplace Diversity
On War, Dancing, and Light: Why Metaphors Matter
Storytelling as “Game-Changing Technology”