Each month, we pause for a moment to read mindfully, using literature as a springboard to think about, and to practice, compassion, empathy and awareness – of ourselves and of the world we live in.

American author Willa Cather’s novels evoke the landscapes of the American west, from the plains of Nebraska to Colorado’s Mesa Verde, and they depict frontier life in the late-nineteenth and early-twentieth centuries. Though she is primarily known for longer works such as My Ántonia, O Pioneers and The Song of the Lark, Cather began her career as a poet and writer of short stories, and published many of them throughout her life.

“On the Gulls’ Road” (1908) takes place at sea rather than in the American west. Nonetheless, Cather’s short story attends to landscape and seascape, as well as the relationships between people, in a manner similar to her better-known works.

As you read “On the Gulls’ Road,” consider these questions:

On the Gulls’ Road
By Willa Cather 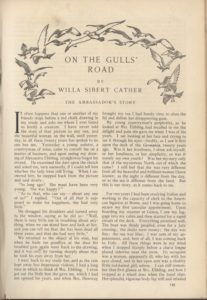 Image via the Willa Cather Archive, University of Nebraska-Lincoln

It often happens that one or another of my friends stops before a red chalk drawing in my study and asks me where I ever found so lovely a creature. I have never told the story of that picture to anyone, and the beautiful woman on the wall, until yesterday, in all these twenty years has spoken to noone but me. Yesterday a young painter, a countryman of mine, came to consult me on a matter of business, and upon seeing my drawing of Alexandra Ebbling, straightway forgot his errand. He examined the date upon the sketch and asked me, very earnestly, if I could tell him whether the lady were still living. When I answered him, he stepped back from the picture and said slowly:

“So long ago? She must have been very young. She was happy?”

Keep reading the story here, or listen to it on YouTube.