Stepping into Others’ Shoes: Literature and Workplace Diversity

The current issue of Harvard Business Review (July/August 2016) contains several articles explaining the reasons why workplace diversity programs simply don’t work. “Diversity training programs largely don’t change attitudes, let alone behavior,” writes Iris Bohnet, Director of the Women and Public Policy Program at the Harvard Kennedy School, and co-chair of its Behavioral Insights Group. “Start by accepting that our minds are stubborn beasts,” she explains. “It’s hard to eliminate our biases, but we can design organizations that make it easier for our biased minds to get things right.”

For Bohnet and her colleagues, behavioral design means structural changes that disable our biases – like orchestra auditions behind a curtain, or software tools that strip age, gender, socioeconomic background and educational information out of résumés. But the flipside of bias is openness and empathy. If we only create systems to strip people of the characteristics that make them different, aren’t we missing a critical opportunity to learn, accept, and incorporate different points of view? Bohnet herself is open to the idea people’s beliefs can change, but that to do so, their experiences have to change first. 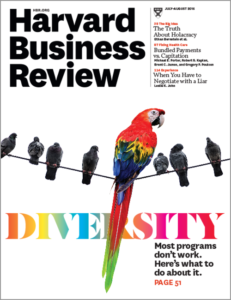 Sharing literature with colleagues in the workplace does just that. A shared story creates a safe and effective proxy for the conversations people normally don’t have at work, opening avenues to discuss race, religion, culture and even politics. Whether discussing Richard Wright’s Black Boy or Khaled Hosseini’s The Kite Runner, literature provides contexts to share personal experiences and to try on foreign ones: to put oneself in the shoes of others. Although this fact, in and of itself, may not be surprising, our evidence highlights two corollary insights that are: first, that the personal narratives emerging from a shared literature discussion change people’s perspectives remarkably quickly and second, that the experience not only opens one’s mind to the plight of others, but also creates powerful opportunities to feel heard and to find seemingly different colleagues whose perspectives are akin to ours. In short, it provides the critical two-way street to see, but also to be seen. A few examples illustrate these findings more clearly.

We have shared our awe about the insights of hospital co-workers reading Isabel Wilkerson’s The Warmth of Other Suns, the powerful depiction of the Great Migration. Adding their own migration stories, the diverse group explored the stark differences in their upbringings, their cultures and their experiences. One older white male participant shared that he had never heard of Jim Crow before the group began to read together, while several younger African American women told us they had never held such open conversations about race at work. But the most powerful insight may be that these conversations took place within weeks of the start of their first Books@Work program. Reading two previous books over ten weeks, the group had gelled and formed the confidence and safety to tackle extraordinarily personal topics, and to do so with sensitivity and an openness to learning more about themselves and each other.

In an East Coast manufacturer, a cross-hierarchical and cross-functional group read Julie Otsuka’s When the Emperor was Divine, an affecting novel about one family’s experiences in the Japanese internment camps during World War II. The group brought the historical context forward to the present, seeing the book as a lens to consider – and re-consider – the plight of refugees around the world. For one young engineer, discussing the book created the occasion “to share a little bit about myself… it allowed people to talk about topics or ideas that revealed a little more about their mindset or the way that they operate or see the world.” He continued, “I have a lot of friends that come from immigrant families. Immigration for me is important. Depending on how similarly people thought, there’s that feeling of affirmation.” And his colleague saw the book as a chance to revisit her own views on immigrants and refugees, “Before this book I was dead set against bringing refugees into this country because of everything that’s going on, all the violence. It made me think about that. You can’t just judge a whole race because of some militants. It’s not right, I wouldn’t want somebody to do it to me or somebody I love. It changes your mind, it changes your thinking about things.”

In their article describing diversity programs that might work, Frank Dobbin and Alexandra Kalev point out that contact between groups lessens bias, citing historical research that suggests that diverse groups working side by side begin to see themselves first as equals. In fact this idea of contact lies at the core of these discoveries – contact across hierarchies and functions within a given organization, but also contact with the experiences of diverse characters in narrative literature. That these narratives are often fictional is irrelevant – the opportunity to use the story to explore personal experience creates the platform we need to question our biases and shape our willingness to learn more about others.

To be clear, there’s a place for structural mechanisms to help us create diverse workplaces right away. But we also need to create the opportunities and the spaces to explore what makes us different, and to discover what we have in common. Embedded in the algorithmic and behavioral solutions proposed by Bohnet and her colleagues is the underlying belief that developing human empathy is a slow and cumbersome process. But Books@Work outcomes suggest that it does not have to be.