A Text at Work: Robert Frost’s “The Mountain”

Robert Frost’s poem “The Mountain” was published in his collection, North of Boston, in 1914. He had been publishing poetry since 1894, and Frost himself was 40 when North of Boston was released. “The Mountain,” like the other poems in this book, is the work of a mature, dedicated writer, one who would quickly become an American icon. As the Poetry Foundation notes, “Since 1915 Frost’s position in American letters has been firmly rooted; in the years before his death he came to be considered the unofficial poet laureate of the United States.”

Most of us are familiar with Frost in one way or another. It’s very likely that we read “The Road Not Taken” in high school; perhaps we even had to memorize it. And if you know the phrase “good fences make good neighbors,” then you know Frost, too. His poetry is realist and regionally-specific, redolent of New England in its description of smells, sounds, sights and people. It is also conversational, and embraces New England’s dialects while at the same time maintaining a technical mastery of rhythm. “The Mountain,” like the rest of the poems in North of Boston, is written in blank verse–like most of of Shakespeare’s plays or Paradise Lost. But whereas the first sentence of Paradise Lost is 26 lines long and a challenge for even this English PhD to read, “The Mountain” begins simply:

“The Mountain held the town as in a shadow
I saw so much before I slept there once:
I noticed that I missed stars in the west,
Where its black body cut into the sky.” 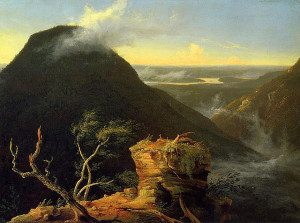 This is straightforward, readable writing that nonetheless is deeply evocative of place. The beauty of this line is what it notices–the absence of stars that defines the presence of a mountain, the almost violent disruption of the night sky by the landscape. If you have never seen a mountain, you are offered the sense of one at night. If you live so close to the mountain you almost fail to notice it, Frost gives you the chance to step back and look at it once more, performing that essential function of art that Shklovsky describes as “[making] a stone feel stony.”

But the legibility of Frost’s poems belie their complexity. Representations of his poems, popular and otherwise, are rife with misunderstandings.  This is no coincidence. In fact, it may well be by design. As Jesse Schotter writes for The Modernism Lab at Yale University, Frost “shares a deeply pessimistic sense of the barriers between individuals – often barriers of language – with such writers as T.S. Eliot.” In other words, Frost explores the way language acts as a barrier for understanding or as a conduit for misunderstanding. Confusion over his poems reflects this investment

What I love about “The Mountain,” then, is not so much its depictions of the mountain itself, though these are elegant and exist in abundance. What I love is that this poem, like the more famous “Mending Wall,” is itself an exploration of barriers – of those things that get between people and other people, or between people and their best selves. Those things that separate us. Mountains are one kind of barrier. The poem’s second speaker, whom the narrator asks “Where is your village? Very far from here?” replies

“There is no village – only scattered farms.
We were but sixty voters last election.
We can’t in nature grow to many more:
That thing takes all the room!’ He moved his goad.
The mountain stood there to be pointed at.”

This mountain gets in the way of people, keeping them from creating a solid community or village, maintaining them in “scattered farms.” It also exposes the difference between the narrator and the farmer. Whereas the narrator, a visitor to the area, wants to climb the mountain, the farmer has only ever “been on the sides / Deer-hunting and trout-fishing.” As he explains toward the end of the poem,

“I’ve always meant to go
and look myself, but you know how it is:
It doesn’t seem so much to climb a mountain
You’ve worked around the foot of all your life.”

The rest of the poem, as the farmer tries to describe the top of a mountain he has never seen, is all hearsay and rumor. Both the farmer and the narrator try to grapple with complexities of language, especially those concerning a certain mystical stream at the top, one which is said to be “warm in December, cold in June.” Finally, the farmer acknowledges,

“I don’t suppose the water’s changed at all.
You and I know enough to know it’s warm
Compared with cold, and cold compared with warm.
But all the fun’s in how you say a thing.”

All the fun’s in how you say a thing. It is fun to play with language, to write and to think about how that writing shapes understanding and solidifies perception. But, as the farmer here acknowledges, language also misrepresents. Perspective is everything. It is only when we “compare” warm with cold, cold with warm that we get some understanding of the stream. This lesson is a tool we can take with us into the world when we try to understand the temperature, the latest story in the media or each other.

Access the poem from Bartleby.com and let us know what you think!

Books at Work: Clémentine in the Kitchen