The Public Humanities Can Thrive: 5 Ideas from the MLA

In 2014, the annual MLA Convention convened in Chicago, Illinois, taking vulnerability as its theme. The Presidential Forum specifically addressed the public humanities. It considered humanities departments’ vulnerability as they are increasingly subject to funding cuts and political attacks; at the same time, it thought about how the humanities are increasingly viable  and needed in these times of ours. The panelists’ six presentations were released online through the MLA’s journal, Profession. In this two-part series, we sum up some important takeaways.

[1] For many, the teaching faculty members do within their institutional homes already constitutes public humanities work.

“For me, teaching is where I most often and most deeply engage in the work of the public humanities; that is, the classroom is where I help form the public that will be, tomorrow’s public, and also engage, along with others, the texts that form the humanities. [. . .] A liberal education requires the cultivation of certain capacities: for recognizing and respecting the difference of others; for entering into times, places and subjectivities not one’s own; for critical engagement with language and with difficult ideas, including ideas that go against the grain of whatever common sense we bring with us to the classroom. I see my work as cultivating those capacities and raising hard questions about how they will be used in ways ‘highly beneficial to society.’” 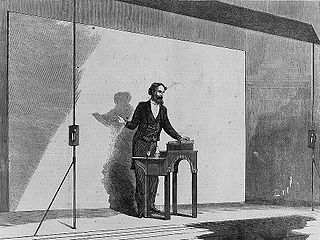 Charles Dickens as He Appears when Reading, Charles A. Barry, 1867 [Public Domain], via Wikimedia Commons

[2] At the same time, faculty members at many institutions already see themselves contributing to the public humanities as they perform the humanities outside of their institutional homes.

Howard describes this as “engaging people outside the academy with works of art that we teach inside that academy.” For Howard, who teaches Shakespeare and Renaissance Drama at Columbia, this means mediating “postplay discussions” at theater events in New York City. For Farah Jasmine Griffin, this means creating public programming:

“Another such program occurred at the Apollo in the spring of 2013. I worked with Geri Allen, a composer, arranger and bandleader, and our director, S. Epatha Merkenson, to write a program that would both entertain and educate the audience about the history of women jazz artists who performed on the Apollo stage. We wanted to place these women in the context of a broader social and cultural history.”

[3] The public practices of humanities scholars are often in tension with their department’s expressed goals and administrative functions.

In her essay, “Doors, Departments and Public Humanities,” Julie Ellison illustrates this “tension” in her own department by citing a boring department “Internship Memo.” Many of her department’s undergraduate courses encourage public work and ask that students think about the classroom within the context of “social movements, the arts, public history and museum and memory studies.” However, she

“[wants] to register the contrast between the lively celebration of student agency in [a colleague’s] course description and the regrettably neutral tone in which the memo characterizes internships—neutral at a time when English majors everywhere are hustling to find internships relevant to the major in organizations vital to public culture, public policy and community development.”

[4] The humanities are relevant to, active and public in social movements – and they have been throughout the twentieth and twenty-first centuries.

“The Philadelphia of my childhood in the late 1960s and early 1970s was strongly influenced by the vibrancy and urgency of the black arts movement. The gatherings, meetings, readings, plays, discussions and lectures were not only places where I heard poetry and music but also places of analysis, argument, information, where you learned to think critically, to understand, to debate. [. . .] Public humanities in this context was actually about movement building, about informing a people, encouraging them to see themselves as part of a tradition and feeding and nourishing their intellects and their spirits so that they might be moved to act.

A Debate at the Union Club, c.1887, [Public Domain] via Wikimedia Commons

[5] Public humanities, as a concept, is “analysis, argument, information,” critical thinking and debate – it’s not just about examining artwork, theater, literature or film in public.

Griffin makes this much clear, above. So does Julie Ellison when she laments that, for this very discussion, “the charge to the panelists tilted toward the public humanities imagined as scholars addressing audiences of nonacademic strangers through public lectures and nonspecialist media” – and then goes on to think about internships, and public service appointments, and law, and a Prison Arts Project.

This special issue, like the MLA panel it developed from, is aimed at humanities professors, and as such it thinks much and specifically about how faculty engage with public humanities projects. The essays offer food for thought for nonprofits and people – PhDs or otherwise – engaging in public humanities work, especially as we foster partnerships with academics and academic institutions. We can only benefit by knowing the challenges professors face within their departments and institutions as they seek meaningful humanities opportunities beyond traditional academic publishing and conferences. How might we help them overcome these challenges? How might we create a stronger conversation about the value of the humanities to the public good? Surely, thinking about how using traditional humanities skills in public is tantamount to “doing” public humanities is a good place to start.

A Literary Editor Walks into a Think Tank