We might think of summer, with its long days and children out of school, as prime reading season. But October’s longer nights and chilly mornings signal the kick-off for months of reading. After all, what is cozier on a cold day than curling up with a good book? Inspired by New York Times Style Magazine‘s and One Grand‘s recent series “My 10 Favorite Books,” we’ve challenged ourselves to name our own 10 “Desert Island Books.” This week, Program and Curriculum Director Jessica Isaac shares hers.

To me, this novel feels perfect. In telling the story of a formerly enslaved woman after the Civil War, haunted by the living ghost of a child she lost through a tragedy manufactured by the slave system, Morrison narrates trauma and its bending of reality better than I imagined such a thing could be done. 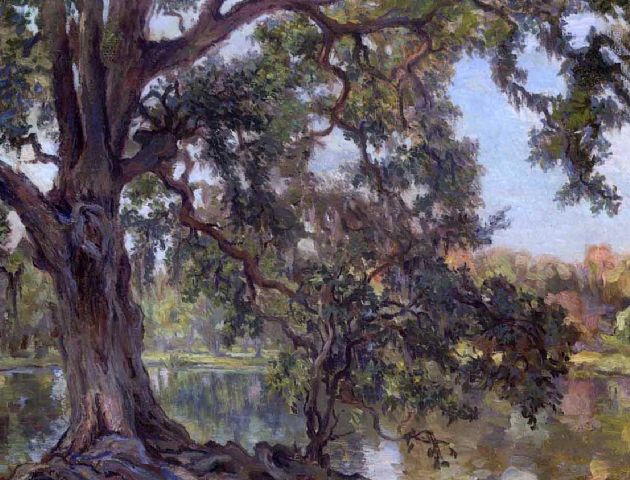 Reading this novel in college was transformative for me as I was entering adulthood. Its perspective on what it means to be fully oneself as a woman in our culture gave me courage to keep trying to find ways to make that possible.

As I Lay Dying, William Faulkner

Faulkner depicts a poor Southern family’s experience of the loss of their mother and the journey to bury her. Despite the pain that the characters endure, or perhaps precisely of it, Faulkner creates a lot of heartbreaking humor. It’s short and somewhat more accessible than his other works, and I like the movement between different narrators for each chapter. A way to remind readers that there is always more than one story.

This is a childhood favorite, one I’ve already written about on this blog, that I compulsively reread.

Anything by Octavia Butler

Parable of the Sower, something from the Patternist series, Xenogenesis. . .There’s something buttery and warm about her prose – even the hard moments are made appealing by her gentle, masterful touch. And her characters are so real, so complex and so interesting. I feel safe when I read her work–safe but able to face the darkest elements of human experience.  I never fail to fall completely under the spell of her writing from the first page. 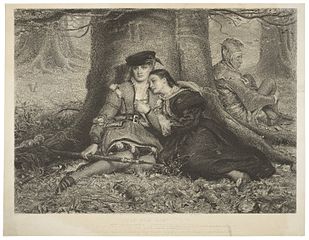 Crossdressing, a band of exiles making merry in the forest, romance, friendship and a sharp, witty heroine in Rosalind. What more could you ask for?

A collection of Mark Twain short fiction, like this one

Though I’m partial to Shelly Fisher Fishkin’s multivolume set of facsimile editions of Twain’s works, to pack lightly I would take a collection of Twain short fiction that has all the highlights – “The Notorious Jumping Frog of Calaveras County,” “Jim Baker’s Bluejay,” “Fenimore Cooper’s Literary Offenses,” and “Jim Blaine and His Grandfather’s Ram,” wherein the narrator gets taken in by friends who get him to ask Jim Blaine to tell the story of his grandfather’s ram. The joke’s on the narrator, as when Blaine gets going (and has a few drinks under his belt), he never actually gets around to telling the story. He rambles instead, which makes up the bulk of the story’s text. I can’t read it without crying from laughing. Here’s a taste:

“. . .and he lit on old Miss Jefferson’s head, poor old filly. She was a good soul–had a glass eye and used to lend it to old Miss Wagner, that hadn’t any, to receive company in; it warn’t big enough, and when Miss Wagner warn’t noticing, it would get twisted around in the socket, and look up, maybe, or out to one side, and every which way, while t’other one was looking as straight ahead as a spy-glass. Grown people didn’t mind it, but it ‘most always made the children cry, it was so sort of scary. She tried packing it in raw cotton, but it wouldn’t work somehow–the cotton would get loose and stick out and look so kind of awful that the children’ couldn’t stand it no way. She was always dropping it out, and turning up her old deadlight on the company empty, and making them oncomfortable, becuz she never could tell when it hopped out, being blind on that side, you see So somebody would have to hunch her and say, ‘Your game eye has fetched loose, Miss Wagner, dear’ – and then all of them would have to sit and wait till she jammed it in again – wrong side before, as a general thing, and green as a bird’s egg, being a bashful cretur and easy sot back before company. But being wrong side before warn’t much difference, anyway, becuz her own eye was sky-blue and the glass one was yaller on the front side,so whichever way she turned it it didn’t match nohow. Old Miss Wagner was considerable on the borrow, she was. When she had a quilting. . . at her house she gen’ally borrowed Miss Higgins’s wooden leg to stump around on …” 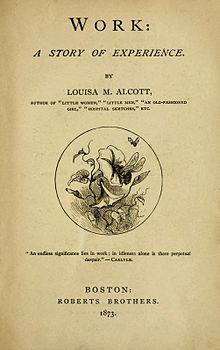 Title Page to the 1873 1st edition, via Wikipedia.org

Work: A Story of Experience, Louisa May Alcott

One of Alcott’s lesser known novels, Work tells the story of Christie Devon, a young woman from a family of modest means, who sets out to find her way in the world. The novel follows her through a series of jobs that illustrate the (relatively limited) range of possibilities for a young woman in late nineteenth-century Boston and its environs. The limitations of Christie’s working life remind me to be grateful for the efforts of women like her that have made a larger set of possibilities open to me.

Alice’s Adventures in Wonderland and Through the Looking Glass, Lewis Carroll

I love the strangeness of wonderland and the land through the looking glass; I love feeling my world turned upside down as I experience those places with Alice. But the melancholy of unfamiliarity, of a hostile world, of the confusion of not knowing how things work or whether they have your best intentions at heart is what brings me back to these books.

I haven’t read this. I’ve wanted to, for a long time, but I’ve been putting it off because I love Carolyn Steedman’s other work so much that I want to save her last few titles for a special occasion. Steedman has written two books on childhood to which I very nearly owe the inspiration for my dissertation (The Tidy House: Little Girls Writing and Strange Dislocations), but Landscape is where she turns to autobiography to write history. She examines her mid-twentieth-century upbringing in order to understand what it means to be a working class girl (and woman).

Looking back on this list, I’m struck by how often I’ve listed things that I love because they made me laugh, and how many things I love because they speak powerfully to women’s experience and perspectives. More than that, though, these are all stories I find myself wanting to hear (and experience, and inhabit) again and again, stories that reward rereading with new insights and greater depth of understanding. Surely that qualifies as good company for time spent on a deserted island.

Why We Still Love Alice

The End of Summer Reading: Our Favorite Books

Books for which I Am Thankful