Reading James McBride’s The Color of Water with Books@Work

At Books@Work, we find books and short stories that generate meaningful discussion and encourage colleagues to share more of themselves. As one participant shared, a good book “makes it easier to break down people’s issues and have difficult conversations, because it’s hidden behind the cloak of the material.”

For many groups, a “good book” is a novel with dynamic characters and ethical dilemmas. For others, it might be a nonfiction narrative like Margot Lee Shetterly’s Hidden Figures, which often resonates with engineers and manufacturing employees. But some books, like James McBride’s memoir The Color of Water, find success and provoke powerful discussions with groups across the board.

What is the book about? 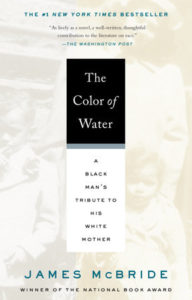 The Color of Water via Penguin Random House

James McBride’s memoir describes the life of his mother, a self-declared “light-skinned” woman who is evasive about her past, her race and her identity. After fleeing her Orthodox Jewish family to get married at seventeen, she has twelve biracial children with two African-American husbands. Overcoming adversity and racism, she puts all twelve children through college and later pursues her own degree in social work.

What Books@Work groups have read it?

Numerous Books@Work programs have read McBride’s memoir, including a group of parents, teachers and mentors at a Cleveland school; administrative and medical staff members at a veterans’ hospital; a group of engineers at a large midwest manufacturer; and a diverse group faculty and staff at a large research university.

What do participants talk about?

A participant in the group of parents, teachers and mentors found the book to be a productive way to talk about the challenges of parenting:

“We talked about racism and what is going on with the police and politics today. I think a lot of that just hit home, especially with raising kids and trying to get them to understand that these things are going on without scaring them. You never think about what they take with them as they grow up. So we were like, ‘Oh I’ve got to be careful how and what I teach them.’ It just hit home.”

Participants at the veterans’ medical center talked about identity, and the book became a vehicle to explore new perspectives:

“We talked about how this woman made herself fit into society, like a square peg in a round hole. How she protected her family and how her children became people who contributed to society. It’s like you’re voyeuring into somebody’s life, and you see how different other people’s lives are than your own. And the trials and tribulations that she had to go through being a Jewish woman with biracial children.”

For staff members – from upper to entry level – at a healthcare company, the book spurred participants to share personal stories and memories:

“One person shared, ‘Oh, my mother went through this. She was Jewish, and she converted.’ Or some people shared that they, too, are single mothers. Or they have been in interracial relationships that were frowned upon. You learn about people.”

What do professor facilitators say about the book?

“When you talk about this book with adults [as opposed to students in the university], it’s totally different kind of conversation,” said one professor. “Adults reflect upon the experiences they’ve had in different geographic areas and different points in their lives, their workplaces, all that. We talked about family and how families are structured. We talked about racial ethnicity. We talked about our childhoods. We had one person in our group who grew up in South Dakota and he had not walked into a grocery store until he moved to the city when we has 12. That just blew the whole group away. They’ve been working together 20 years and didn’t know that about him.”

Why does The Color of Water work for Books@Work groups?

The Color of Water, with its complicated themes around race, identity, family, and religion, spurs exactly the kinds of rich conversations that forge stronger bonds between participants – particularly by offering a safe way to tackle uncomfortable but important subjects.

“It’s not really a common work conversation that you’d have with your coworkers,” one participant said. “To be in a space to have this discussion about race gave me a lot of perspective on some of the challenges that people face that I didn’t even know existed.”

For a parent in the school group, the book encouraged necessary conversations that facilitated human-to-human relationships as opposed to parent-to-parent:

“Within the school setting, you’re not necessarily talking about your needs and wants, your dreams, your aspirations. We’re not the sort of small school where we could just build those relationships. We have to find alternative ways to build relationships, and honestly I can’t think of a better way [than discussing McBride with Books@Work] because it’s non-confrontational and it’s not about our kids.”

Image: Iran Darroudi, Lamentation of Water (In Memory of Parviz), 1987, [Fair Use] via WikiArt.org