A Simulated Mission to Mars and the Human Need for Stories

As is my custom, I recently devoured a new podcast from Gimlet Media called The Habitat during a long and un-air-conditioned road trip to Florida.

The Habitat follows a simulated mission-to-Mars research project called HI-SEAS. As space travel to Mars becomes more likely, researchers are tasked with perfecting equipment like “the dome,” a semi-portable living structure about the size of a two-car garage that would house six astronauts. But HI-SEAS is designed to test “a far more critical piece of equipment: humans.”

For a year, six “human guinea pigs” agree to spend every waking and sleeping moment together in a dome on a Hawaiian volcano, a stand-in for the red planet. HI-SEAS seeks to determine what these conditions will do to their astronauts. Poring through 200 hours of the crew’s audio diaries, The Habitat host Lynn Levy shadows the experiment from day one. “It’s like the premise of a space age reality show,” she says.

There are so many themes around social interaction and workplace relationships to explore in The Habitat. But the theme that gripped me most during the podcast’s eight episodes was how tightly we cling to stories. 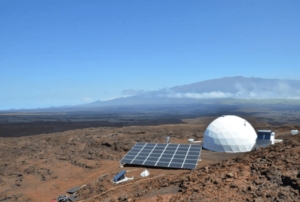 The HI-SEAS Habitat on the Big Island of Hawaii, image via HI-SEAS.org

What is a simulation if not a story? The success of HI-SEAS relies on the participants’ wholehearted embrace of its premise. If a single person goes off script, the experiment does too. The rules are unambiguous: “The atmosphere outside is poison,” Levy details. “If they step outside without a spacesuit on, they’ll die. They’re gonna live like that, in this little dome, cut off from their friends and families, for one whole year.”

During the experiment, crew members explore their volcanic Mars-like surroundings in spacesuits to “perform high-fidelity geological field work.” When they receive food deliveries, they wear noise-cancelling headphones so as not to hear the truck pulling up outside the dome. Each member of the crew is so dedicated to the simulation that it becomes their truth – so much so that they repeatedly refer to their friends and family “back on Earth.”

The crew of The Habitat reveal something crucial about stories and their societal value: they’re how we test reality. A recent piece for BBC explores the various evolutionary theories as to why narratives are so essential to human societies. “One common idea is that storytelling is a form of cognitive play that hones our minds,” David Robson writes, “allowing us to simulate the world around us and imagine different strategies, particularly in social situations.”

Isn’t this exactly what’s happening in The Habitat? The crew are characters in a living, breathing story. Their commitment to the narrative lets researchers observe how real astronauts will fare together in harsh Martian conditions. The data informs the strategic processes that will undergird an eventual mission to Mars. In a low-stakes environment, six volunteers simulate a year-long scenario that will help researchers make hiring decisions, guide training procedures and create an ideal living and working environment for future astronauts. The Habitat research team is using a lived story to test the boundaries of survival on a chaotic new planet.

It’s not unlike what Books@Work does in the workplace. “Books bring up real life situations,” an operations leadership team member at a healthcare provider recently told us. “And it’s interesting to see how people react to them.” Another participant shared how discussing stories dovetailed with the company’s culture: “event plus response equals outcomes.” Navigating fictional situations allowed teammates to “step back and learn about each other” and imagine how they might respond. Like the HI-SEAS habitat, the stories become a safe testing ground to hone decision-making skills and make sense of challenges they may one day face.

At one point in The Habitat, host Lynn Levy becomes convinced that two crew members who spend all of their time together are involved in a romantic relationship. She listens obsessively to recordings of their conversations. She plays tapes back for her producers. Eventually, she asks them outright: you’re a couple, right?

They’re not. The laughter and closeness that Levy mistakes for romance is nothing more than a friendship. But Levy’s overactive imagination? Her immediate reflex to conjure a romantic plotline for two friendly crewmates? That’s what humans do. It’s our enduring need to make sense of the world with a story.

Image: Joseph Beuys, Hearts of the Revolutionaries: Passage of the Planets of the Future, 1955, Tate Modern, London, UK, [Fair Use] via WikiArt.org