It’s hard to pick up a business journal without reading something on the importance of workplace culture, whether linked to productivity, employee contribution, creativity and innovation, or even physical workspaces. But how to create a strong, inclusive culture remains elusive, and the “right” starting point – more mysterious still! Should it be top down? We know that leaders are important models of desired behaviors. Or should it be bottom up? If we want every employee to consider his/her role in the culture of the organization, owning the challenge becomes critical.

In short, the answer to both questions is YES. A great workplace culture is established only when everyone has a seat at the table – and when all employees, from top to bottom, commit together to the sort of environment they want to work in, remembering that what’s best for the group may not always be what’s best for each individual.

This is not a new idea.

In his iconic The Social Contract, the Enlightenment philosopher, Jean-Jacques Rousseau, proposes that members of a society need to create a set of laws or principles – a “collective will” – that each, in turn, chooses to obey. Collectively “making” the system becomes a social pact that ensures their individual freedom. 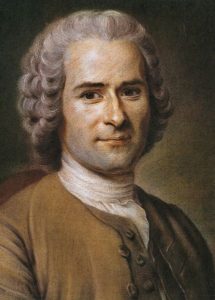 For Rousseau, this search for freedom emerges from his concern that, over time, humans grow increasingly interdependent and prone to see themselves through the eyes of others. By envisioning governing principles born of a collective will, the individual participates in society without sacrificing his or her freedom to others. As such, Rousseau posits, the social contract balances individual freedoms with political authority.

If we view Rousseau’s “collective will” through the lens of workplace culture, then a social construction of that culture requires both the ownership and the participation of all employees, across hierarchies and functions. The ensuing “social contract” becomes the foundation for a common ground, and a mutual accountability and personal commitment to each other and the organization.

But this takes time, trust and a safe space to practice.

Reflecting on a recently ended cross-functional and cross-hierarchical Books@Work program, a participant expressed her amazement at how quickly the members of her group took on a sense of responsibility to each other, to the common good of the group and ultimately, the organization:

“It was remarkable and amazing to me to see the people who were really challenged by some of the books that we read, but who still stuck with them. Challenged because they didn’t like it, they didn’t understand it, or for some people it brought up personal experiences that were really emotional, that were difficult for them to process. I think being in that environment, you have people you have come to know, and you can trust and be supportive.”

This supportive environment quickly translates to work. For a natural team, a talent discussion immediately on the heels of a Books@Work session stunned the team’s leader. In lieu of a typical 90 minutes where members were reluctant to expose non-performing employees for fear of losing unfilled positions, this particular meeting lasted four hours. “The team spoke of their own teams with respect and dignity,” said the team’s leader, “truly delving into each person’s behaviors while questioning their own roles as leaders.” One of his team members asked for advice about three non-performing members of his own team. “He wouldn’t have said that before.”

The human struggle to create and nurture effective communities of free thinkers has challenged great philosophers for centuries. Rousseau concerned himself with the effective balance of the individual and the collective. The zeal to create the most effective organizational cultures highlights the continuing effort to create a whole that does not extinguish the productive contributions of the many.

Organizations that intentionally create a safe space to discuss hard topics invite the participation of all of their people and nurture practices to support each other in finding solutions. They start with powerful interpersonal connections and a commitment to a collective vision. And at the core of their social contract: a willingness to keep talking.

Jean-Jacques Rousseau died in 1778, and yet his social contract remains more relevant than ever in our systems of government and in our workplaces. It just goes to show that “everything old is new again.” Even centuries-old philosophical theory.