A few years ago, an online debate broke out about relatability and its artistic value. After attending a performance of Shakespeare’s King Lear, “This American Life” host Ira Glass tweeted about the play’s “fantastic acting” and humor – and yet his biggest takeaway was that “Shakespeare is not relatable.” In a scathing response, New Yorker staff writer Rebecca Mead took issue with what she called the “scourge of relatability” and its recent critical influence. To demand that a work be relatable sets a troubling expectation, Mead wrote, “that the work itself be somehow accommodating to, or reflective of, the experience of the reader or viewer.”

How much much do we need to relate to a text – or to people, new ideas, or even colleagues in the workplace – in order to accept and appreciate them? 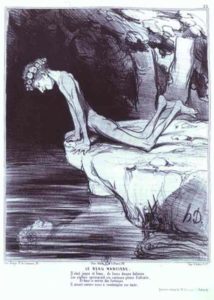 One of the joys of literature, film or any artistic medium is the experience of recognition – with characters, with situations, with settings. In a film about author C.S. Lewis, screenwriter William Nicholson wrote, “We read to know we are not alone.” When an author articulates a truth that resonates, we feel understood and validated. We see this play out time and time again in workplace programs across the country. After reading Willa Cather’s short story “Paul’s Case: A Study in Temperament,” one Books@Work participant, an employee in a large medical facility, was struck by the story’s Pittsburgh neighborhood:

“I really related, because it was in Oakland. It was where I grew up, Schenley Park. I could just visualize everything. Cordelia, the street, it was like I was there. . . I read it and was like, ‘Wow, this story is just for me.’”

This participant could imagine herself in Cather’s story. It was her old stomping grounds, brought to life by an author who described the neighborhood just as she remembered it. This experience of identification, of knowing we are not alone, is magnified when multiple participants connect over a shared point of relatability: for example, when two readers see themselves in the same character or when two readers have endured the same struggle portrayed in a story.

But we shouldn’t dismiss Mead’s point, especially in its broader sense. In her New Yorker piece, she cites review after review where film and literary critics equate relatability with merit. The problem with relatability isn’t that it’s wrong or selfish to relate to a text. It’s that relatability is rarely – if ever – universal. What’s better, a text or an idea that reflects our own reality, or a perspective that introduces and exposes us to unfamiliar realities?

After years of interviews with Books@Work participants, it’s become clear that relatability breeds connection. But even clearer is the realization that relatability isn’t a requisite for connection. In fact, it’s often when we read something outside our comfort zones that we learn to understand and appreciate each other better.

The same participant who recognized Cather’s portrayal of Oakland encountered a room of colleagues who grew up differently. When she shared that she identified with the main character’s “very poor background” and seemingly dubious choices, another participant found the character to be distasteful. What followed was a moment of tension that triggered a productive conversation where participants learned more about each other’s perspectives. “I don’t think we had that kind of revelation in any of the other sessions,” the first participant shared.

Relatability is personal; we’ve found in Books@Work that sharing what personally resonates makes way for community building. But we can also make connections without relatability – to literature, to new ideas, to our fellow humans who may be different from us. The best workplaces and communities are those where diverse colleagues ideate, negotiate and collaborate with each other, regardless of their disparate lives, backgrounds and thought processes.

In a world where we seek out news sources that speak to our beliefs and connect with people who agree with our perspectives, a new approach is warranted. To Ira Glass, Shakespeare might seem remote and unengaging. But exposure to timeless ideas holds enormous value, especially ideas that challenge our assumptions and our beliefs. Imagine an inclusive workplace where opposing sides can meet in a room, share their opinions, tell their own stories and discuss. In the end, isn’t that what we all want?