We recently had the chance to speak with Guido Isekenmeier, who recently facilitated a Books@Work discussion of Franz Kafka’s “The Hunger Artist” in German with German participants. Guido is an Assistant Professor of English and American Literature at the University of Stuttgart, Germany. His research and teaching focus on the history of description in narrative fiction and the relations of postmodernist literature and visual culture.

Tell me a little bit about your background and the kind of classes you teach at the university.

I’m doing all kinds of classes: undergraduate, graduate, lectures, seminars. Unlike some of my colleagues in the United States, we have to cover the whole field from the beginning to the present, including literary, historical, theoretical stuff. We’re also doing English and American literature. 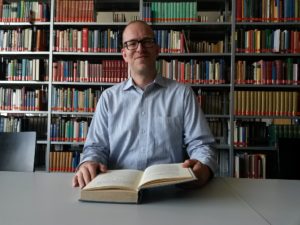 How was your Books@Work experience different from teaching students in the university classroom?

One thing I’ve noticed is that it’s different to enter someone else’s turf, as opposed to the students entering your class. And that means participants bring along their own often implicit hierarchies, and so there’s a lot more interpersonal mediation.

The obvious difference is that we tend to teach literature as a sort of language game at university. So the task is that of mastering a genre, that of literary criticism, and replacing subjective or personal readings with historically or theoretically informed interpretations.

But I was surprised that even if you focus on a more personal angle, you might arrive at similar insights. I was often at the point in these Books@Work discussions where I could have entered into another register and addressed the text from a more theoretical point of view – which of course isn’t the point – but I was surprised that we actually got there. There was one point where two people in the group started to discuss the value and function of literature, and one sort of supported an aesthetic, or “art for art’s sake,” approach and the other a more functional or cultural-ecological approach to literature.

Why did facilitating with Books@Work appeal to you in the first place?

The idea of trying to make literary texts relevant in other contexts appealed very much to me because we’re in a secluded space [in the academy]. Actually, in the ’60s, there was a movement in Germany where students and university teachers went out, particularly into factories, to do this kind of thing with a more politically engaged, leftist, unionist kind of impetus. I thought that heritage was also appealing, even though we aren’t supposed [in Books@Work] to push people into certain directions. But it was very interesting to get out there and see what can be done with literature in a practical sense.

Very few of them. I know quite a few knew Kafka as an author and were probably forced to read something in school. That was a recurring comment, actually: “Yeah, I remember reading that in school and hating it.” There is a sort of false respect toward literary texts in that many people started off with, “Yeah, it’s difficult.” But it is actually a text using ordinary language. But still, there was this idea that it’s complicated when it’s actually quite a simple text to read and understand, to a certain extent.

That’s one of the interesting things [about Books@Work]. You can get people to re-approach literature without the pressures of a school system. Just to get them back to read a text that most of them seemed to find annoying in the past.

It also allowed them to make connections to the workplace. We talked a lot about work-life balance. That’s something that comes up in that text sort of automatically. And that works out well, I think.

After the discussion took off, did the group seem to open up and find ways to talk about the story? Did they loosen up a little bit?

I had two groups in that session last month, so we were working on the same story but with different people. In the morning group, it was sort of a very gradual process – sort of a cybernetic, self-evolving discussion. In the afternoon, it was completely different in that quite a few of the participants had already arrived at their conclusions early on in the session. . . You know, it’s fascinating, those differences. Same text, similar groups, but things worked out completely differently. You never know where you’re going.

What did you take away from the facilitation experience? Is there anything you’ll take back to your own teaching in the university?

I’ve touched on this, but again, I was surprised that you can get to the point of entering literary, historical, theoretical discussions by focusing on subjective readings. Now, I’m less skeptical [in my own university teaching] toward students’ personal relations towards the texts we read. And I’m more willing to follow a route that they come upon by just relating the texts to their own lives.