By Invitation Only: Kickstarting the Gender Conversation at Work

In the wake of the #MeToo movement, a flood of women have come forward to shed light on another serious challenge they face at work: the “boys’ club” culture that exists across many industries. It permeates traders in the stock market, chefs in the restaurant industry and programmers in Silicon Valley. It’s in the advertising industry, where 180 female executives have launched a new initiative to bridge a glaring gender gap. And it’s in the music industry, where one female songwriter says that opportunities for women to develop are few and far between.

Recently at the 90th Academy Awards, Best Actress winner Frances McDormand concluded her acceptance speech with a directive for Hollywood: “I have two words to leave with you tonight, ladies and gentlemen: inclusion rider.” Hiring more women is a crucial first step. But the authentic inclusion of women necessitates taking a hard look at a general corporate culture that makes 81% of women feel some form of exclusion at work. 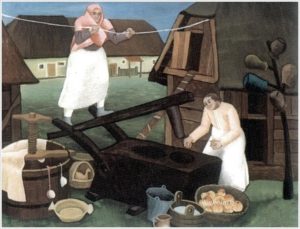 Ivan Generalic, Women Are Working, 1941, Fair Use via WikiArt.org

In 2013, renowned gender experts Barbara Annis and John Gray published survey results from over 100,000 interviews of men and women executives across the country, concluding that the exclusion of women occurs due to repetitive patterns of behavior and interaction. They write, “Women often feel left out of casual get-togethers and informal social events where team bonding takes place, introductions are made, relationships are established and information is shared.” These are the invitation-only events we traditionally associate with the boys’ club – a series of rounds on the golf course, late lunches or drinks after work – that encourage networking and mentorship.

When people spend time together outside of work on a consistent basis, they deepen their relationships. But when the opportunity to connect with colleagues comes by invitation only, a culture of exclusion takes root.

In a recent article for Forbes, leadership consultant Dede Henley stresses that a healthy and welcoming workplace culture requires a genuine willingness to talk about how we relate to each other. “Each of us,” she writes, “men and women alike, must figure out how to upgrade the ways we interact with others.” It means inviting women to the golf course – but it also means creating the safe space for men and women to have difficult conversations about gender difference. Henley tells the success story of a group of male and female colleagues who met regularly to talk frankly about gender. “What these men and women said to each other were bridges to a common understanding,” she writes. “The only way to do this is to talk it out.”

At Books@Work, we also find that a good conversation – to which everyone is invited – spurs the kind of collaborative culture change and social connection that Henley promotes.

One shop floor team at a large manufacturing company has recently completed their fifth Books@Work program. The group includes two women, one of whom is the only female machinist at the company. The other female participant in the group recently remarked that Books@Work has allowed the team to explore how they relate as men and women. “Although we’re reading the same thing,” she said, “it’s been really interesting to see [how we explore] very specific gender differences without being mean or nasty.”

This collective exploration has made it possible for the team to have meaningful conversations about gender inequality. “We’ve discussed sexism and gender bias,” the participant continued.

“It’s like now we can talk and we can begin the communication on equal pay within our ranks and equal opportunity within our ranks for the guys and the girls here. . . And wherever we can start that, that’s where it needs to happen. It’s amongst [us in Books@Work], who then in turn get empowered to talk amongst other people about equality [company-wide]. Why is [my female colleague] the only female machinist? That’s an important conversation to have.”

It’s impossible to foster a culture of inclusion when opportunities for relationship-building and perspective-taking are restricted. But when we invite everyone to the conversation, men and women alike feel empowered to speak up about issues that matter and connect on a deeper level – and the boys’ club becomes a thing of the past. As our female participant so eloquently said, “To create that culture of equality, we’re gonna have to speak of equality.”

Maredith is the Communications and Marketing Manager of That Can Be Me, Inc., facilitator of Books@Work.