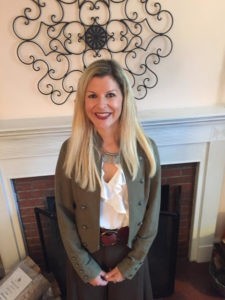 You recently facilitated a Books@Work session with executive leaders at a large manufacturing company. Your discussion focused on a chapter from Ron Chernow’s biography Alexander Hamilton, which inspired Lin-Manuel Miranda’s award-winning musical.

How did you approach the conversation?

I love to start off with a open-ended question in Books@Work discussions. For one sci-fi story that examined humans turning into robots, I asked what it means to be human. We applied it to corporate culture and how technology has changed how we interact.

So for the Chernow, I kicked things off with a question that I pulled from Miranda’s musical, a line spoken by Aaron Burr:

“How does a bastard, orphan, son of a whore and a
Scotsman, dropped in the middle of a forgotten
Spot in the Caribbean by providence, impoverished, in squalor
Grow up to be a hero and a scholar?”

How did Hamilton come from nothing to become who he was? What was his leadership style? How did he know to insist that we do need a central government, even though we wanted to break away from the British monarchy? We had so much to wrap our brains around.

What did the Alexander Hamilton chapter explore?

It was Chapter 26, titled “The Wicked Insurgence of the West”, about the Whiskey Rebellion [in 1791 following the American Revolution]. Whiskey grain farmers and distributors in Pennsylvania were being taxed because our country was in such debt. The farmers protested, deciding they did not want to pay. They were arming themselves and rising up against their new government.

George Washington, the president at the time, wanted to be more temperate – maybe allow them to have their militias, allow them to win. But Hamilton decided no, we need to prove that we have strength, we cannot allow them to rebel in this way.

We explored what might have happened if Washington had won that argument, and how that would have affected the course of American history. And we applied this to corporate culture, where we have these little rebellions where people decide, “I don’t like this new technology,” or “We don’t like this new way of doing things.”

So there were really two kinds of leadership modeled in the text – Washington’s and Hamilton’s. Did people end up falling on one side or the other?

Obviously, we look at Washington, and he has a successful record in his presidency, and his temperate leadership did work at times. But we had an in-depth discussion about how sometimes you need to be Hamilton and stand your ground. That said, we also talked about the duel that lead to Hamilton’s death; in that way, holding his ground and honor and respect did not turn out well for him. So we had a very interesting conversation about how leaders decide when to hold their ground versus when to be measured and compromise.

Did themes around political leadership resonate with the corporate leaders in the room?

I think this is how the Lin-Manuel Miranda came in, seeing how he reimagined the story of an early political leader. The participants identified because their company is constantly reinventing itself. And they saw that in Hamilton’s personal story, too: he was an immigrant with very little family who reinvented himself into a powerful leader.

Did the participants identify with that reinvention story on a personal level – coming from nothing to become an influential leader?

Yes, I think many people in the room think, “How did I get here?” It’s a common feeling that no one really wants to communicate. Leaders rarely want to admit that they feel nervous or unprepared, or that they don’t belong. They have to wear this front of confidence.

So that part of our conversation was really about personal confidence versus admitting when you’re vulnerable or lonely as a leader. When you’re handling fires and making sure that your people are taken care of, you often don’t want to let that shield down. So that was a great experience for them.

As a professor who has facilitated many different texts with Books@Work participants, what do you feel is the most valuable aspect of discussing literature with colleagues in the workplace?

I think it’s the power of a metaphor. A metaphor helps us explain stuff we really can’t articulate. It allows us to communicate and understand things that are going on in our own lives. It’s amazing because people examine issues that they haven’t even thought about. We talked about Hamilton’s work life – he was a workaholic whose health was failing. And someone said, “This makes me think about how I’ve been sick all the time. I’ve only gotten four hours of sleep just like Hamilton did on the road to the Whiskey Rebellion.” It’s that power of the metaphor. We relate to Hamilton so that we can explain our own lives.