How Literature is a Catalyst for Creative Thinking

This week, we are pleased to feature Books@Work board member Karen Nestor. Karen is a longtime educator, having taught every single grade level from kindergarten to graduate school and has deep experience as a researcher, often employing a biographical approach.

Noted Harvard psychologist Jerome Bruner died this year in June at 100 years of age, in the same year that the world commemorates the centennial of the publication of John Dewey’s Democracy and Education. These two great educational thinkers have provided bookends for the vast change – and disturbing lack of change – that marks a century of thought on how people learn and develop. In Bruner’s obituary in the New York Times, Howard Gardner said, “He was the most important contributor to educational thinking since John Dewey – and there is no one like him today.” 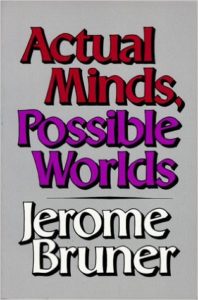 Bruner’s work has influenced Books@Work from the outset. The very title of his famous book, Actual Minds, Possible Worlds, contributed to the notion that when actual minds join together in meaningful conversations about literature, positive worlds emerge. Books@Work confirms that individuals, organizations and communities experience new possibilities when “stories [provide] a map of possible roles and of possible worlds, in which action, thought and self-definition are permissible (or desirable).”

Dewey lamented that many adults in 1916 saw few possibilities for personal growth, and while many tout Dewey’s approaches to lifelong learning, too often training is focused on narrowly-defined work-related skills. But Dewey, and later Bruner, had something far broader in mind: “The object of understanding human events is to sense. . . human possibility.” As the co-founder of Harvard’s Center for Cognitive Studies, Bruner began the cognitive revolution that studied creative problem solving and the way that learning shapes culture.

For Bruner, this culture is grounded in collective stories: “Our sensitivity to narrative provides the major link between our own sense of self and our sense of others in the social world around us.” Bruner’s research found that literature is a catalyst for the very innovative or creative thinking we need to fuel economic growth. He noted that people are “infinitely capable” of sticking to existing beliefs even when those beliefs keep them mired in ineffective action. But when we appreciate and understand imaginative stories, Bruner asserted, we increase our ability to suspend belief and envision new possibilities – for ourselves, our families, our workplaces and our communities.

During the last century, as today, leaders often valued the rigorous testing of the hard sciences, but Bruner recognized that scientific thought often requires “rambles.” He described rambling as “the process by which we get ideas worth testing.” He even believed that rambling together might serve to support the possible worlds that lead to surprises – or creative breakthroughs – in many fields. Surprise is an extremely useful phenomenon that helps individuals pay attention to what they take for granted, to eradicate conformity and its intractable suppositions. It makes sense, then, that Books@Work’s most productive outcomes often come from the surprise of seeing one’s own untapped capabilities, discovering the unexpected strengths of coworkers or developing lasting interpersonal connections during the shared moments of book discussions.

One hundred years ago, Dewey asserted that a democratic society depends on the “play of the diverse gifts of individuals to achieve its goals.” Over the better part of the following century, Bruner explored ways to make that happen. Today, Books@Work brings their ideals and their research to practice – in companies and communities across the United States. Books@Work helps individuals and organizations exercise innovation muscles in a safe and creative context. These creative learning approaches – and creative collisions – strengthen actual minds and create possible worlds that promise to power democracy into the next century.

Image: John Speed, A New and Accurate Map of the World, 1626, [Public Domain] via Wikimedia Commons

Recognizing Others and Ourselves Through Literature
Comparing Points of View: A Reading Journey
When You Bring Books to Work, Everyone Wins