This week, we revisit a previous post by Board Member, educator and frequent Books@Work facilitator Karen Nestor, who reflects on her experience discussing a Gabriel García Márquez short story with veterans at the VA Domiciliary.

For most of my life I have believed in the power of literature to affect the human heart. But sometimes, a discussion of good literature provides an unexpected insight into the profound impact of stories. This week I had such an experience as each person in a room became a teacher and each person became a learner.

This flash occurred at the Veterans Domiciliary, a residential program that is jointly run by the Veterans Administration and the Volunteers of America, and that serves veterans facing a variety of serious issues, including homelessness, trauma, addiction and other life-challenging hurdles. Books@Work brought a mini-version of the program to the entire cohort of veterans currently at the Domiciliary during their weekly group meeting. 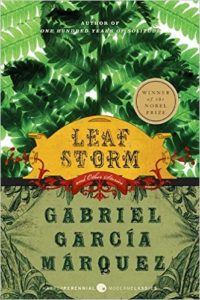 Everyone received a copy of a very unusual short story, “The Most Handsome Drowned Man in the World” by Gabriel García Márquez, and one of the professors read the story aloud as we followed along. Then we all broke into typical, professor-led Books@Work groups to discuss.

In the story, a drowned man washes up on the shore of a village in South America. Eventually, the town adopts him as their own and arranges a beautiful burial for him. As one of the facilitators, I prepared for the discussion with some trepidation. Márquez’s magical realism can be difficult to comprehend and even a little weird. I wasn’t sure how solid my own grasp of the story was, but the veterans had no trouble sharing their insights:

The discussion took a dramatic turn when another man said, “I see this story in a different way. I see that the drowned man is all of us right here. We all have big problems, but we all have the chance to become something different.” To peel back, as another described, the layers of seaweed and debris to find their better, “most handsome,” selves. To become someone who has a positive influence on family and community. Heads began to nod as everyone chimed in.

The room lit up as the veterans connected a strange story set in a foreign land to their human realities. Their interpretation of the story was much deeper than my own. Books@Work showed me once again that literature opens the heart and expands the mind – when people come together to share it.