Declarations of Survival: Representations of Motherhood in Women’s Holocaust Art and Narrative

We were delighted to participate in the first annual Cleveland Humanities Festival, in partnership with the Baker-Nord Center for the Humanities at Case Western Reserve University. Supported by Ohio Humanities, the Festival hosted speakers and events around the city over a two-week period in early April. Linked by the theme “Remembering War,” the Festival sought to “engage the public in addressing some of society’s most challenging issues and pressing concerns,” in partnership with the region’s major museums, educational institutions and arts organizations. For us, the Festival provided an opportunity to bring Books@Work beyond the workplace, and use diverse narrative representations of life experience to challenge assumptions and appreciate the memories, stories and courage of others.

On Wednesday, April 6, 2016, Books@Work held its Festival event, “Declarations of Survival: Representations of Motherhood in Women’s Holocaust Art and Narrative,” at the Maltz Museum of Jewish Heritage. Led by Alexis Baker, a rhetoric scholar from Kent State University, the session offered a stark but moving window on the extraordinary power of legacy and survival during times of unspeakable horror. Attendees included local Books@Work participants, past and present, Books@Work professors, Maltz Museum members and community members new to our organization.

Alexis studies the motherhood imagery women artists use to represent their Holocaust experiences. Through her research, she has observed that men tend to represent themselves realistically – as gaunt and physically emaciated – while women tend to depict themselves optimistically, as full-bodied, often pregnant and/or with children. She argues that women draw on their identities as mothers and daughters in representing their survival.

The group explored these themes of motherhood first by discussing Dina Pronicheva’s powerful narrative of her experiences at Babi Yar near Kiev. Pronicheva survived the 1941 massacre, during which 33,771 Jews were forced to undress, shot and thrown into a ravine. Pronicheva jumped into the ravine and lay still as others died around her and the mass grave was covered in dirt. That night, she dug herself out and escaped to a nearby farm. Pronicheva later testified on numerous occasions against the war crimes at Babi Yar.

Pronicheva punctuates her story with references to motherhood. She begins with the painful parting from her mother, who insisted that Pronicheva “live for her children.” When she becomes afraid while digging herself out of the mass grave, Pronicheva tells herself, “get up, leave, run from here, our children are waiting for you.” After her escape, a Ukrainian woman shelters her, believing that because she helped Pronicheva “her two sons will come back from the war alive.” Again and again, the drive to find her children, to continue the family and to prolong her legacy motivates Pronicheva’s survival. 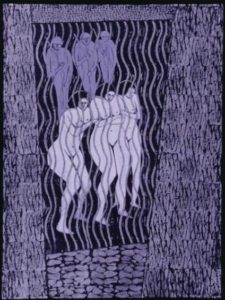 Participants shared powerful responses to Pronicheva’s experience and to the recurring theme of motherhood as a call to survive. The conversations grew richer still as the group examined several pieces of art, including “Women and Children Being Sent on a Transport” by Helga Weissova and “Women in the Holocaust” by Judith Weinshall Liberman. Bouncing back and forth between narrative forms – text and image – and between the images themselves, the group explored the powerful visual devices each artist used to represent strength, beauty and invincibility. For example, Weissova’s depiction of a woman’s pregnant belly extending beyond the barbed wire suggests the hope of freedom for future generations. In Liberman’s work, the wavy bars resemble water; the women, bonded together, look as though they can step right through them. Drawing on personal experience and exploring other dark moments in human history, the participants marveled at the power of women to present themselves, through love, as survivors and protectors in the face of cruel and unyielding circumstances.

At Books@Work, we treasure public events as a way to share collective reflection with a broader cross-section of the community than we currently serve in our programs. As we talked during this event, I was struck by how quickly the process of shared reflection created intimacy within the group. A few participants came with friends or family, but no one knew more than a few other people in the room. Under the glowing lights of the Maltz foyer as evening settled in around us, this fact faded away as we created a community together, sharing deeply held beliefs, stories of survival and powerful responses to these powerful war narratives, both text and image alike.